If you use a Samsung smartphone, you may not be getting the most out of it. As someone who uses a lot of smartphones on a regular basis, I definitely have a few choice modifications and settings changes I make to get Samsung's phones feeling more intuitive, functional, and just plain better as an overall experience. While not all of these changes may be to everyone's preference, and you may know a few of them, hopefully you'll be reminded of a few choice One UI* and Android options that can make your phone just a little bit nicer to use on a day to day basis. (*This post applies to Samsung phones running Android 10 or later.)

In 2020, I think it's a little silly for your volume rocker to be doing anything but controlling media volume. We typically keep our phones in silent or vibrate mode, so controlling system or notification noises with the volume rocker is pretty pointless. Samsung is one of the few phone OEMs still not making media the default volume control out of the box, but changing this is simple enough: just hit the volume rocker, tap the drop-down arrow on the sound menu, and toggle "Use Volume keys for media" on. At that point, you'll be set.

This one drives me batty: Samsung orders its app drawer grid in the launcher like a homescreen: new stuff goes to the end of the list, and it's on you to organize it. This makes no sense! To order your apps alphabetically, simply open up the app drawer, hit the 3-dot menu in the upper right, and tap "Sort" to find the alphabetical sort option. Much better.

By default, Samsung allows surprisingly few icons on your homescreen grid, but with phones as large as they are now, there's really no reason not to be maximizing your real estate. Long tap on an empty area of the homescreen, hit Home screen settings, and set your home and app screen layouts to the largest configuration (5x6). So much room for activities! 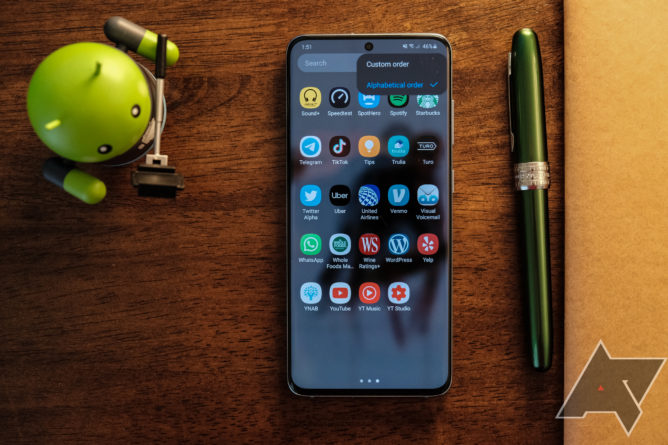